On the 6th Sunday of the Easter season, May 22, 2022, the Sisters of Providence celebrated the Jubilees of five Sisters

How remarkable it is have two Jubilarians celebrating 70 years as Sisters of Providence and  even more extraordinary to have two Jubilarians celebrating 75 years. Collectively, the lives of these five Sisters represent 350 years of dedicated service to our Community and to God’s people! Both Sister Mary Caritas and Sister Kathleen have served as President of the Sisters of Providence. 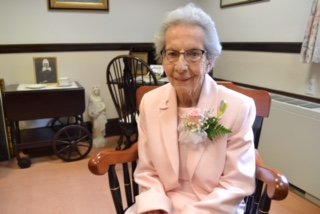 Sister Mary Caritas Geary was a Registered Nurse when she entered the Sisters of Providence from St. Michael’s Cathedral Parish, Springfield. Known in secular life as (Hannah) Jean Geary, she is the daughter of the late John and Kathryn (Slattery) Geary. Among her ministries, she served two consecutive, four-year terms as President of the Congregation (1969-1977) and as President of Mercy Medical Center for 17 years (1977-1993). She ministered as Congregational Vice President from 2009-2013 and resumed that office in 2016 to the present.

Sister Caritas’ early ministries included nursing at St. Vincent Hospital, Worcester (1949-1954) and nursing at Mercy Hospital, Springfield. She became the Administrative Dietitian at Providence Hospital, Holyoke (1959 -1966) and then the Administrator at St. Luke’s Hospital, Pittsfield (1966-1969). She served as Associate Director at Berkshire Medical Center in 1969 leaving there when she was elected to Community Leadership. Since 1993 she has been the Legislative Advocacy Coordinator and Special Projects Coordinator for the Sisters of Providence.

She has participated on numerous Boards locally and nationally and has been a tireless advocate for health care issues. Some of these boards include Chairperson of the Catholic Health Association, Chairperson of the Massachusetts Hospital Association, and a Board member of the American Hospital Association, Western New England College, Catholic Health East, Caritas Christi Health System, Elms College, Greater Springfield Senior Services, and WestMass Economic Development Corporation, to mention a few of her multiple health care, civic, church-related activities.

A graduate of the High School of Commerce and Mercy Hospital School of Nursing, both in Springfield, she earned her Bachelor of Arts degree in Nutrition at Regis College, Weston, and a Master of Arts in Nutrition Education from Tufts University, Medford, and completed a Dietetic Internship at the Francis Stern Food Clinic, New England Medical Center, Boston. In addition, she holds a Certificate in Executive Management from St. Louis University, Mo. 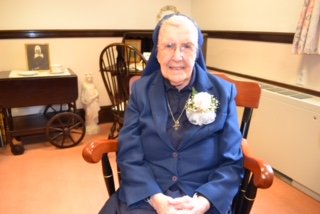 Sister Mary Cecilia Vallee, known in secular life as Mary Louise Evelyn Vallee, is the daughter of the late Paul and Sophie (Pottie) Vallee. She entered the Sisters of Providence from St. Patrick Parish, Whitinsville.

In 1976 Sister Mary Cecilia’s ministry focus turned to parish work and for more than two decades she served in parishes in Holyoke as census taker and in other capacities such as pastoral assistant and evangelizer. These churches included St. Jerome’s Parish, Holy Cross Parish, Our Lady of Perpetual Help Parish for 20 years (1979-1998), and following her retirement, Our Lady of Guadalupe Parish.

She graduated from Northbridge High School, Northbridge, attended Gregg College, Chicago, Ill., earned credits at Boston College School of Nursing, Boston, and a diploma from Bryant and Stratton Business School, Boston. She was a member of the American, Massachusetts, and Central Massachusetts Medical Records Associations and an Extraordinary Minister of the Eucharist.

Sister Mary Cecilia was a founder and longtime coordinator of the Western Massachusetts Branch of the Consolers of the United Hearts of Jesus and Mary Lay Apostolate. She also developed Prayer Followers of Christ the King, (PECK), a prayer family with many members. 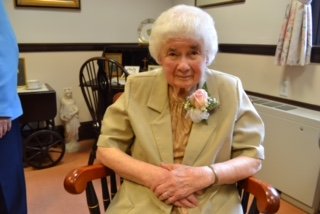 Sister Theresa Lucier served as Pastoral Associate in her hometown parish of St. Mary’s of the Assumption in Milford, for 27 years until her retirement in 2014. Prior, she was on the parish ministry staff at St. Mary Church in Charlestown, for 12 years. A RN, she first cared for children at our Lady of Providence Children’s Center in West Springfield for five years.

The daughter of the late Edward and Helen (Kerns) Lucier, she is a graduate of St. Mary’s High School in Milford, and St. Vincent Hospital School of Nursing in Worcester. She earned her Bachelor of Nursing Degree at Boston College. She holds a Master degree in Hospital Administration from Xavier University in Cincinnati, Ohio, studied at the Pastoral Institute for Social Ministry at Notre Dame, Ind., and earned a Master of Divinity Degree from Immaculate Conception Seminary in South Orange, N.J. 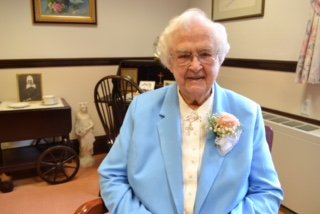 Sister Constance O’Brien ministered at St. Joseph of the Pines (SJP) in Southern Pines, N.C., for close to 40 years and also served on SJP’s Board of Trustees. In 2011, SJP named one of its four newly developed Family Care Homes–Constance Cottage–in her honor. First known as Sister Mary Immaculata, she began her ministry in the south in 1963 at the former Providence Hospital in Murphy, N.C. Her five years there included service as nurse, nurse anesthetist and as clerk in the Hospital pharmacy.

A Registered Nurse and Certified Nurse Anesthetist, her tenure at St.  Joseph of the Pines began in 1969. Over the ensuing years, she served in its former acute care hospital and skilled nursing facility as Director of Nursing Service, nurse anesthetist and pharmacist. In 1971, she was named Assistant Administrator – Director of Nursing Service at the skilled nursing facility.

In 1973, she accepted the added Congregational responsibility of being the Local Coordinator for other Sisters of Providence assigned there. In 1988, Sister Constance transferred into a new SJP position as Director of The Pines Villa, a retirement community. She retired from that post in 1995, and began as Assistant Manager at SJP’s Providence Place, an affordable housing rental community in Aberdeen, N.C.

Sister Constance is the daughter of the late William and Kathleen (McMullen) O’Brien. She is a native of Putnam, Conn., and graduated from Killingly High School in Danielson, Conn. Her other education includes St. Vincent Hospital School of Nursing, certification as a nurse anesthetist from the Mercy Hospital School of Anesthesiology, and a Bachelor of Science degree in nursing from Boston College School of Nursing. She also held membership in the American Association of Nurse Anesthetists. 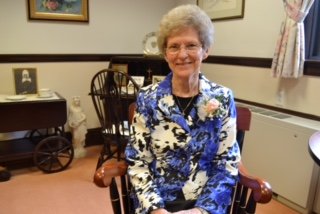 Sister Kathleen Marie Popko is the daughter of the late Peter and Phyllis (Kisiel) Popko. While a postulant, she attended Boston College for two years and then transferred to Marillac College, a Sister Formation College in St. Louis, Mo., to complete her Bachelor Degree in Nursing. After a few years in nursing, she became a project writer for Model Cities in Springfield before pursuing Master and Doctoral degrees from Brandeis University’s Heller Graduate School for Social Policy in Waltham. In 1975, she became Assistant Administrator for Planning at Mercy Hospital in Springfield for six years, while serving also as an Adjunct Assistant Professor at Brandeis University, and as a research associate for the Levinson Gerontological Policy Institute.

Elected in 1977 to the Sisters of Providence Executive Council, and again in 1981, she began serving as SP Vice President and project director for the formation of the Sisters of Providence Health System (SPHS) implemented in 1984. Elected President of the Congregation in 1985, she served two, four-year terms in addition to serving as chair of SPHS, and on local, regional, and national boards and committees. She also was elected to the Presidency of the in Leadership Conference of Women Religious (LCWR), Silver Spring, Md., from 1990-1991, travelling to Hungry and Poland representing LCWR with the Leadership Conferences there after the fall of the Berlin Wall.

In 1984, Sister Kathleen was named President of the Sisters of Providence Health System and then worked with other Catholic health systems to form Catholic Health East (CHE), a multi-institutional system from Maine to Florida. In 1997, she became a member of the CHE Management Team and Executive Vice President for its Northeast Division providing oversight for these CHE regional health care organizations for eight years. She then assumed the role of CHE’s EVP for Strategy and Mission for four years.

In 2009, she was chosen again as President of the Sisters of Providence and elected again in 2013 and 2019. A member of the CHE Steering Committee, she was involved in its merger with Trinity Health, Livonia, Mich., and was elected to the Trinity/CHE Board in 2013 and served until 2019.

She led the Sister of Providence organization’s creation of the Sisters of Providence Ministry Corporation (SPMC). She worked to transform the former Brightside campus in West Springfield into The Hillside at Providence, a setting focused on elders, and acquired funding to build Hillside Residence, 36 units of affordable elder housing that integrated health services through the on-campus Mercy LIFE, a PACE program.

Sister Kathleen was honored many times for her work in health care including receiving the Concilia Moran Award, the Lifetime Achievement Award from the Catholic Health Association, and an honorary doctorate from the Elms College in Chicopee.

She served on numerous Boards including UMass Worcester Medical Center, UMass Board of Trustees, Catholic Health Association, CHA’s Health Progress Editorial Advisory Board, and McAuley (Housing) Institute, among others. She wrote a book on regulatory controls impacting hospitals and several articles and gave many presentations.