General Chapters are pivotal moments in the life of our community. It is during our Chapters that we craft congregational directional statements and elect the Sisters who will lead us in achieving those objectives.

At the most recent General Chapter, held from July 20 through July 21, 2019, the delegates re-elect our community leadership—Sister Kathleen Popko, president, Sister Mary Caritas Geary, vice president, and Sister Senga Fulton, secretary/treasurer. The three will serve in those positions until 2025.

Held at Genesis Spiritual Life and Conference Center in Westfield, the Chapter also resulted in the delegates approving our 2019 Consensus Statement in which we reaffirmed our commitment “to make all of our decisions in light of their impact on women, Earth, and those who are poor.” In addition we stated: 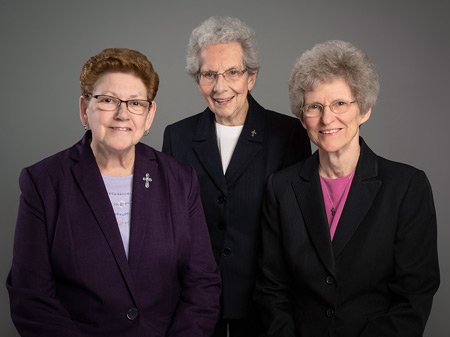 Prior to CHE, she became in 1994 President/CEO and Board Chair of the Sisters of Providence Health System headquartered in Springfield. During her tenure, she was instrumental in forming Catholic Health East with SPHS becoming one of the three founding members.

Sister Kathleen served on the Steering Committee that brought together Catholic Health East with Trinity Health in 2013.  She became a founding member of the new national Trinity Health Board. Her Board service included appointments to Trinity Health’s Stewardship Committee, chairing the Mission, Ministry and Advocacy Committee, and then co-chairing with Roberta Waite, Ed.D., the People Centered Care Committee.

She was President of the Leadership Conference of Women Religious, the first Chair of the Consolidated Catholic Health Care Board, and Chair of the McCauley (Housing) Institute Board.

She has served on numerous national, regional, and local Boards including the Catholic Health Association, the University of Massachusetts Board of Trustees and its Medical School Board, and Covenant Health System and Holy Cross Health System Boards.  She serves on the Catholic Health Association’s Editorial Advisory Board for its Health Progress publication.

She has authored a book on the implications of regulatory controls on hospitals, published several articles, and has spoken widely on health care and sponsorship matters. 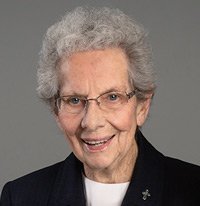 Sister Mary Caritas Geary is currently SP Vice President and VP of the Sisters of Providence Ministry Corporation. In these roles her most recent efforts have focused—with those of SP President Sister Kathleen Popko—on the development of the Congregation’s The Hillside at Providence, a ministry site offering health care services and affordable housing for elders.

From 1977-1993 Sister Caritas was President and CEO of Mercy Medical Center in Springfield and on the Boards and Chair of the Catholic Health Association and Massachusetts Hospital Association, as well as the Board of the American Hospital Association. While at Mercy, she worked zealously to ensure that the services provided met the highest standards, supporting innovative programs such as Healthcare for the Homeless, and adding Weldon Center for Rehabilitation to the campus.

In 1994, the Sister Mary Caritas, SP, Center for Oncology opened adjacent to Mercy and today offers 32 chemotherapy treatment bays and the services of Pioneer Valley Oncology and Hematology Associates.

A well-known and familiar figure throughout Western Mass. and with local, state and national legislators, Sister Mary Caritas has chaired Springfield’s Task Force on Elder Affairs and the Springfield Council on Aging. She served on the U.S. Conference of Bishops Advisory Committee on Healthcare and was one of the Catholic Health Association’s 10 designees to a contingent of 200 national healthcare providers who convened at the White House to discuss health care legislation. She also serves on several health and business development boards locally. 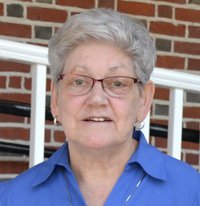 Sister Senga Fulton has served on the Sisters of Providence Executive Council and as the Congregation’s Secretary/Treasurer since 2016. She is the Congregation’s full-time liaison to Sisters of Providence living at Mary’s Meadow and Providence Place. As a licensed certified social worker, her earlier career focused on the needs of women, poor persons, and individuals with mental health challenges. Her attention to the needs of these members of our society resulted in more than one successful social service program to address housing and employment concerns.

Immediately prior to her current responsibilities, Sister Senga directed Annie’s House, a former program of the Mental Health Association of Springfield. She co-founded and directed the Annie’s House program offering supportive, transitional housing for single women who were struggling with homelessness.

Sister Senga’s ministry contributions include working as program planner for the mental health services component of the SP-sponsored Healthcare for the Homeless program and overseeing the Congregation’s Service, Empowerment and Transformation (S.E.T.), an umbrella program of ministries designed to provide volunteer community outreach to poor and marginalized persons.

Her earliest ministry as an SP included service as a Group Life Educational Assistant at Brightside for Children and Families in West Springfield. Later, she volunteered in The Women’s Place, a program of Open Pantry Community Services, Inc., in Springfield.

With a grant from the Massachusetts Department of Welfare in 1985, Sister Senga founded and directed the Open Door program under the auspices of Open Pantry Community Services, Inc., Springfield. The program provides advocacy and outreach services to poor and homeless persons in the Greater Springfield area.