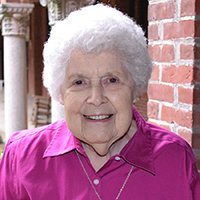 Sister Doris was a registered nurse when she entered the Sisters of Providence congregation in 1953, having graduated the year before from St. Luke’s Hospital School of Nursing in Pittsfield, Mass. She began her ministry as a nursery nurse at Our Lady of Providence Children’s Center for four years and then ministered in the healthcare field over the next 20 years in various Sisters of Providence institutions: Mercy Hospital in Springfield (1960-61); the Holy Child Guild in Westfield (1961-65); Farren Memorial Hospital in Montague City (1965-69); the Sisters of Providence Infirmary (1969 -71). During this time she also earned credits at Greenfield Community College and the University of Connecticut, Hartford.

From 1971-73, she was the Local Coordinator and Health Nurse at Beaven Kelly Home; and then participated in the Clinical Pastoral Education program at Mercy Hospital. She worked briefly as a nurse at Mount St. Vincent Nursing Home and later at Providence Hospital, including part-time at the Methadone Clinic (1975-77).

Sister Doris became a part-time pastoral visitor at Mount St. Vincent for several years, while also serving as Archivist of the Sisters of Providence in 1977-85.  Following a sabbatical year at the Still Point House of Prayer in Stillwater, NY in 1985, she returned to nursing full-time at the Holyoke-Chicopee Senior Services Program in 1987.

In 1997 Sister Doris moved to Red Springs, N.C., where she volunteered her services among the needy in food distribution, healthcare and education. She returned to Massachusetts in 1999 and began a new ministry as a pastoral visitor for WestMass Elder Care clients. After her retirement in 2003, Sister continued to volunteer at WestMass Elder Care by providing pastoral care to staff until 2015.

She is survived by her Sisters in Community, her sister Sandra Bissaillion, and her niece, Sue Timoneda.

Sister Doris’ Liturgy of Christian Burial was celebrated on Saturday, February 22, 2020 at 10 a.m. in the Providence Place Chapel.