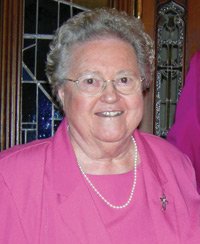 Sister Mary John Bosco, SP died on February 5, 2019 in the 74th year of her religious life. Born Marjorie Ann Lyons in Worcester, Mass. in 1926, she was the daughter of the late John and Mary (Murray) Lyons. Having graduated in 1944 from North High in Worcester, she was a student nurse at the Mercy Hospital School of Nursing when she entered the Sisters of Providence Congregation in 1946. Following her novitiate, Sister Mary John Bosco resumed her nursing studies completing them at Mercy Hospital in 1949.

She began her nursing career in the SP Infirmary in Holyoke and then moved to Worcester in 1953 where she was an Assistant Supervisor in nursing at St. Vincent Hospital. In 1959, she pursued further studies earning a Bachelor of Science in Nursing degree from Boston College School of Nursing in 1960.

Sister Mary John Bosco ministered for 38 years at St. Vincent Hospital. During her tenure there, she was a surgical nurse and supervisor of the surgical division and then a clinical nurse specialist in thoracic and cardiac care. During this time, she took courses at Worcester State College, Boston University and Assumption College where she received her Master of Science degree in Rehabilitation Counseling in 1979. From 1969 to 1976, she was an instructor in the School of Nursing and then became the Director of Student Health for the School of Nursing until 1987. She assumed the role of nurse in the pain clinic until 1991 and as receptionist at St. Vincent’s until her retirement in 1993.

Sister Mary John Bosco returned to the Springfield area and volunteered at St. Luke’s Home in Springfield and at Genesis Spiritual Life and Conference Center in Westfield for several years. Also from 1993 to 2011, she served as part-time pharmacist for the Sisters of Providence Congregation. She was a member of the National League for Nursing, the Diocesan Council of Catholic Nurses, the New England Catholic Hospital Association and an associate member of the St. Vincent Alumnae. In 2009, she was the recipient of the Retired Religious Award from the Diocese of Worcester.

Sister Mary John Bosco is survived by her Sisters in Community, her nephews Patrick Mahoney and Timothy Mahoney, their families and several cousins. The Wake was be held on Friday, February 8. A Liturgy of Christian Burial was celebrated on Saturday, February 9 at 10 a.m. in the Providence Place Chapel.

To email your condolences please email the Sisters of Providence Communications Office.