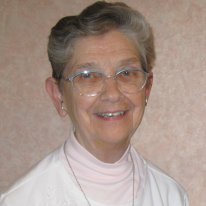 Sister of Providence Dorothy Young, formerly known as Sister Mary of the Sacred Heart, died on October 12, 2021 in the 72nd year of her religious life. Born in Holyoke, she was the daughter of the late George and Abigail (Landry) Young. Sister Dorothy entered the Sisters of Providence Congregation in 1950. She began her ministry in the admitting office of Mercy Hospital in Springfield and the business office at St. Vincent Hospital in Worcester. She ministered in child care for the majority of her active years. In 1955, she was a cottage mother at Our Lady of Providence Children’s Center (Brightside) in West Springfield. In 1967, she became the day care supervisor at St. Agnes Guild in Worcester and then pursued studies at Springfield College and graduated with an Associate Degree from Holyoke Community College.

In 1969, Sister Dorothy continued her studies at Marillac College, St. Louis, Mo. where she received her Bachelor’s Degree in Education in 1972. She returned to Massachusetts serving as nursery supervisor and then as administrator of the Holyoke Day Nursery. She also pursued further education receiving a Masters Degree in Day Care Administration from Lesley College in Cambridge, Mass. in 1977.

After leaving her position at the Holyoke Day Nursery in 1983, she was director and teacher at the People’s Institute Child Care in Northampton until 1993. She became head teacher for the infants at Bright Horizons Child Care in Enfield, Conn. for a year before taking a sabbatical program at Wholistic Growth Resources in Little Falls, MN. Sister Dorothy then served part time as the Assistant Activities Director at Mount Saint St., Holyoke, and as a member of the pastoral care staff at St. Luke’s Home in Springfield.

After retirement in 2003, Sister Dorothy volunteered at the Montessori School in Enfield, Conn., and taught CCD at Mater Dolorosa Parish in Holyoke. She is survived by her Sisters in Community, her nieces and her nephews.

A Wake will be held prior to the funeral Mass in Providence Place Chapel on Thursday, October 14, 2021, from 9:00 am to 9:45 am at Providence Place, 5 Gamelin St., Holyoke, Mass. Wearing of masks is required by all. The Liturgy of Christian Burial then will be celebrated at 10 a.m.