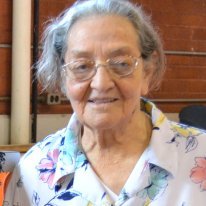 Sister of Providence, Sister Aura Ninfa Arellano, died on April 13, 2022 in the 48th year of her religious life as a Sister of Providence. Sister Ninfa was born in Carlosama (Nariño) Colombia, South America, the daughter of Julio César Arellano and Clara Elisa Chaves.

In 1951, following her education in the Colombian school system, Sister Ninfa joined the Missionaries of Mary Immaculate and St. Catherine of Sienna. Upon her profession, she served as a missionary in the cities, fields and jungles of Columbia. Over the next 20 years, her ministry in nursing, teaching, pastoral and social work expanded to additional locations in Bolivia, Peru and Chile. In April of 1971, she came to the United States to seek medical treatment.

Sister Ninfa continued her education taking several courses at Holyoke Community College and began working in the Spanish Apostolate at Casa Maria, in Holyoke in 1977. For the next 25 years, she continued her ministry in collaboration with Sister Mary of the Immaculate Conception, SP working in pastoral care, catechetics, caring for families and children adjusting to life in the U.S., and providing resources for their integration into the community.

Sister Ninfa travelled to Columbia, South America to participate in a Theological Pastoral Course on the biblical, social, and catechetical studies from April – November 1987. She was honored in 1989 by the Committee of Puerto Rican week for her work among the Hispanics community in Holyoke. A citizen of Columbia, she also became a United States citizen in 1996.

Sister Ninfa continued her ministry at Casa Maria until her retirement in 2002. In 2010, she received a Certificate in Hispanic Ministries from the Institute for Theology and Pastoral Studies from the Elms College and, in 2016, she was recognized and honored by the Hispanic community for her dedicated service at an event held at Guadalupe Church in Holyoke.

She is survived by her Sisters in Community, her first cousin Maria Chaves and her faithful friend, Carmen Padilla. The Wake will be held prior to the funeral Mass in the Providence Place Chapel on Tue., April 19, 2022 from 9:00 am to 9:45 am at Providence Place, 5 Gamelin Street, in Holyoke, Mass. Wearing of masks is required by all. The Liturgy of Christian Burial then will be celebrated at 10:00 a.m.