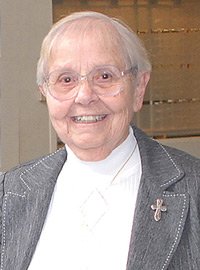 Sister of Providence, Sister Mary Frances O’Leary, formerly known as Sister Dennis Marie, died on April 25, 2019 in the 74th year of her religious life. Born in Worcester, Mass., she was the daughter of the late Dennis and Mary (Laverty) O’Leary.

A graduate of St. Peter’s High School in Worcester, Mass., she was a student nurse at St. Vincent Hospital when she entered the Sisters of Providence in 1945. After making first vows in 1947, she completed her nursing degree at Providence Hospital School of Nursing in Holyoke. She then studied at Mercy Hospital School of X-ray Technology graduating in 1952 and began her ministry as an X-Ray technologist there in 1953 and later at St. Vincent Hospital.

Sister Mary was assigned to Providence Hospital in North Carolina briefly in1956. She returned to Mercy Hospital as Supervisor of the X-Ray Department, while taking courses at Holyoke Community College where she received her Associate’s Degree. In 1971, she became the educational coordinator and was part of the X-Ray Technician Program at Burbank Hospital in Fitchburg, Mass. In 1976, Sister returned to St. Vincent Hospital in Worcester serving as Patient Advocate and then as part of the Pastoral Department.

Sister Mary was a member of Ministers of Providence, a society that is open to graduates of the Master’s Program in Pastoral Theology at St. Mary of the Woods College, a member of Kappa Gamma Pi, the National Catholic Women’s Honor Society and was certified in 1995 as a Chaplain by the National Association of Catholic Chaplains. She received the Monsignor Griffin Award at St. Vincent Hospital and the Retired Religious Award from the Diocese of Worcester in 2014.

She is survived by her Sisters in Community, her brother, Alfred O’Leary, many nieces and nephews, and her colleague and friend, Msgr. Peter Beaulieu of Worcester.

A Liturgy of Christian Burial was celebrated on Monday, April 29, 2019 at 10 a.m. in the Providence Place Chapel.