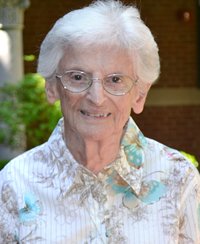 Sister of Providence, Sister Mary Adrianella Grisé died on September 4, 2019 in the 77th year of her religious life. Born Rose Annette Marie Grisé in Ware, Mass., she was the daughter of the late Adrian and Ella (Dubois) Grisé.

Sister Mary Adrianella graduated from North Brookfield High School, Mass., in 1942 and entered the Sisters of Providence Congregation in 1943. She first ministered as a laboratory student at St. Luke’s Hospital in Pittsfield, Mass. In 1955 she began working as a payroll clerk at St. Vincent Hospital in Worcester, Mass. where she remained for the next ten years advancing in positions to accounting clerk, business office supervisor, and controller. In 1966, she became the controller at Mercy Hospital in Springfield, Mass., for two years. Through the years 1963 to 1978, she earned credits from the University of Notre Dame, Ind.; Misericordia College, Dallas, Pa.; and a certificate from Loretto Heights College, Denver, Colo.

Sister Mary Adrianella served nine years as Treasurer General of the Sisters of Providence from 1968 to 1977 and was instrumental in key financial decisions for the Congregation. She also assisted other religious congregations in addressing social security and financial matters. She was elected to the Sisters of Providence General Council for two terms from 1969-1977. She was a member of the Hospital Finance Management Association; the Conference of Religious Treasurers, serving as President of Region 1; a member of the Ad Hoc Committee for Sisters’ Salaries for the Springfield and Worcester Dioceses, of the Program Committee of the New England Conference of the Catholic Hospital Association, and of the Reimbursement Committee of the Massachusetts Hospital Association. She served on the Boards of Trustees of Notre Dame Health Center, Inc., Worcester, Mass., and Mercyknoll in West Hartford, Conn.

In 1978, after completing a sabbatical year in Denver, Colo., she returned to work as a controller at Mercy Hospital in Springfield and later in 1981 as supervisor of the business office at the former Farren Memorial Hospital in Montague City, Mass. In 1983-1988, she became the manager of St. Joseph’s Villa in Southern Pines, N.C. From 1996-1999, she was a member of the Renovation Committee that planned the transformation of Providence Mother House into Providence Place, an independent retirement community, and also served on the Providence Place Board of Trustees for two terms (1999-2008). She later volunteered at Mont Marie Day Care Center, was a pastoral visitor at Loomis House, and served as manager of the former SHARE Program run by the Sisters of Providence, all in Holyoke. After retiring, she volunteered for many years as a part-time receptionist at Providence Place.

She is survived by her Sisters in Community; her sister, Sister Mary Martin de Porres Grisé, SP; her nieces Carole Mimeault, Ann Careau, Lisa Careau Jordan, Patricia Allen LaPete and nephews Paul Careau and William Allen, as well as many other nieces and nephews.

The Wake was held on Thursday, September 5. A Liturgy of Christian Burial was celebrated on Friday, September 6, at 10 a.m. in the Providence Place Chapel.