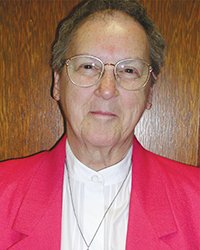 Sister of Providence, Sister Joan Manning, formerly known as Sister Marita Michaell, died on September 21, 2020 in the 70th year of her religious life. Born in Springfield, Mass., she was the daughter of the late Michael and Margaret (Caliri) Manning.

Sister Joan entered the Sisters of Providence Congregation in 1950, following her graduation from Sacred Heart High School in Springfield, Mass. She began her ministry assisting in the dietary department at the former Greylock Rest Home in Adams, Mass. as well as in the bakery and kitchen of the Providence Mother House.

In 1957, Sister Joan attended the prestigious Fannie Farmer School of Cookery in Boston. While studying there, she also cooked for the Sisters living at the SP House of Studies who were attending other schools in the Boston area. Upon graduation, Sister Joan became Supervisor of the Mother House Dietary Department and, in 1966, the Supervisor of the Dietary Department at Our Lady of Providence Children’s Center for eight years. In 1973, she took courses at Holyoke Community College in Holyoke, Mass. and a nurses’ aide course at Mount St. Vincent.

In 1975, Sister Joan entered the field of healthcare as a nurses’ aide, ministering at the Providence Hospital in Holyoke for several years. After participating in a six-month sabbatical program in 1987, she worked for Upjohn Home Health Services in Longmeadow for three years. Continuing her ministry at Farren Care Center in Montague from 1990-1995, she then moved to a new position at the Center for Rehabilitation and Nursing Care in West Springfield for four years.

Sister Joan retired in 1999 but continued to serve as a faithful volunteer at Mercy Medical Center, primarily as a receptionist in the Laboratory Department until 2020. In addition to her cooking talents, Sister Joan had a fine singing voice, often serving as cantor.

She is survived by her Sisters in Community and nephews, nieces, grandnieces and grandnephews.

Given the restrictions of the coronavirus pandemic, all services were private.