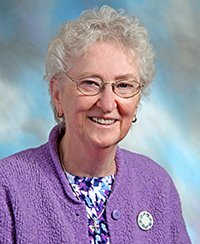 Sister of Providence, Sister Ann Horgan, formerly known as Sister Mary Concepta, died on January 31, 2020 in the 60th year of her religious life. Born in Worcester, she was the daughter of the late Joseph and Mary (O’Leary) Horgan. She was a graduate of St. Stephen’s High School in Worcester and entered the Sisters of Providence in 1960 following in the footsteps of her sister, Sister Mary Horgan, SP.

Following her novitiate, Sister Ann attended Holy Ghost Hospital School of Practical Nursing receiving her diploma in 1964. She began her career as a nurse working at Mount St. Vincent Nursing Home, then at Sisters of Providence Infirmary. In 1969, she went to St. Louis, Mo. for two years to attend Marillac College and then transferred to the University of Massachusetts where she completed her Bachelor of Science Degree in Nursing in 1973.

Sister Ann became a staff nurse at Mercy Hospital, serving later as head nurse of the Medical-Surgical Department and then supervisor of the Ambulatory Services Department until 1979, when she became Administrator of the SP Infirmary. She also participated in the Clinical Pastoral Education program at Worcester State Hospital in the summer of 1975.

In 1981, Sister Ann participated in the Institute for Spiritual Leadership, Loyola University, Chicago, for one year, then served as the SP Vocation/Formation Director for the next six years. In 1987, she joined the retreat team at Campion Renewal Center in Weston Mass. as a spiritual director until 1993 when she studied at the Andover Newton Theological School.

Sister Ann was well-known for her hospitality and her gentle manner with all those she encountered. She is survived by her sister Sheila Horgan, her brothers Joseph and Robert, nieces and nephews, and her Sisters in Community. She is predeceased by her sister, Sister Mary Horgan, SP who died in May 2019.

Sister Ann’s Liturgy of Christian Burial was celebrated on Tuesday, February 4, 2020 in the Providence Place Chapel.