In the land of the founders: Finding the present in the past

Posted in What’s New, From the Archives

As you enter the Providence International Centre of the Sisters of Providence on the outskirts of Montreal, you face an enormous stained glass window which includes wavy lines depicting ripples as from a stone dropped in a pond: or perhaps from the tears of grieving women, like the SP foremothers, Louise de Marillac in France and Émilie Gamelin in Montreal, both of whom knew grief from the death of loved ones.

I expected to write about walking in the footsteps of Émilie Gamelin and other founders of the current day Sisters of Providence. But in reflection, ripples emanating from a center point of impact or like sound waves revealing echoes of earlier voices, best capture my experience. 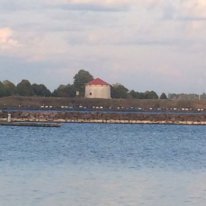 The Morelli Tower in Kingston.

Recalling challenges of the past
As you walk through Kingston, the fortifications of the round Morelli towers with their red-tiled roofs are a reminder that the U.S. and its French/British neighbor, Canada, have not always been friends. So too, as the documents in the Kingston SP’s Archives reveal, the separation of the Holyoke Mission from Kingston led to bitter disappointment and disruption between the two communities. Starting a new mission has always been a difficult task, often in very inhospitable conditions. 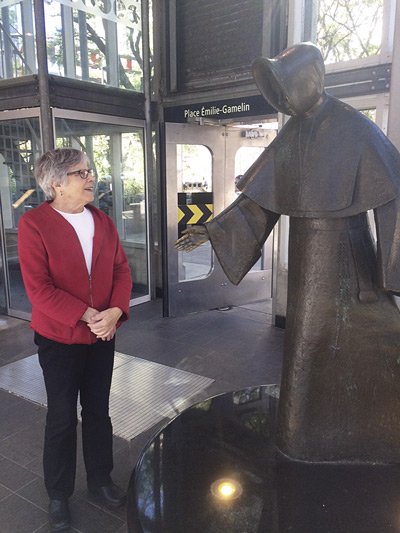 Mother Mary Edward McKinley, who helped to manage and support the Holyoke Mission, was well aware of the difficulties. When moving from smaller quarters to larger accommodations in Kingston, which having been uninhabited for a few years, had to be cleaned as the Sisters moved in—not before.

A more Severe Winter we could scarcely have…the water froze on the floors and one could even slide on them…. While the passages and corridors did not dry….It was only after the fires had been kept burning day and night for a fortnight that the frost was drawn out of the walls and there it glistened like crystal…

Years later, when the Kingston Sisters went to Holyoke, Mother Mary Edward would write to Father Harkins, who had requested their help, that conditions in the school where Sisters first lived and taught were unacceptable.

You tell me that those whose health has failed are the Sisters outside the “School.” Excuse me, if I say you are wrongly impressed…Sr. M. Teresa, who lies in St. Jerome’s graveyard never did aught else in it than teach in St. Jerome’s School, and the fever to which she fell victim was contracted there.

Although she was communicating from Kingston, she put her backbone into the work of establishing the Holyoke Mission; so it is no surprise that she and other Kingston Sisters found separation a severe blow to their congregation—just 12 years from their own departure from Montreal.

Sharing gratitude
In the chapel at the International Centre, seeing the seven candles burning on that Friday, as they do in Kingston and in Holyoke, in remembrance and thanks for being delivered from the typhus epidemic in the mid nineteenth century, I was reminded not of the rift but of the continuity between them all. Healing, justice, helping hands extended through time to the present day was my overwhelming impression. The helping hand extended by the statue of Émilie Gamelin, in the Montreal Metro Station at Place de Émilie Gamelin, reaches through time and is multiplied by all of the Sisters.

When Sister Yvette Demers spoke of her tireless and painstaking work to further the cause of canonization of Émilie Gamelin, evident in the walls of filing cabinets lining her office, it struck me that the miracle I see in the Sisters is their clear-eyed vision of human beings. 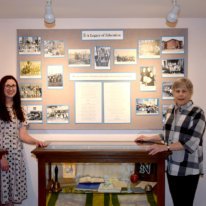 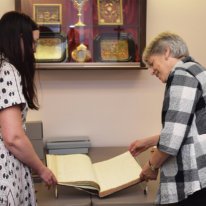