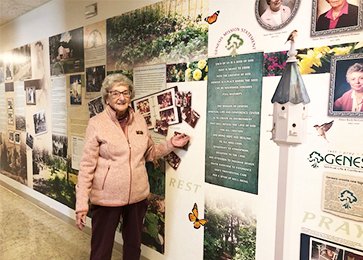 FOR SEVERAL YEARS, Sister Elizabeth Oleksak, SP has been gathering photos and documents about the history of Genesis Spiritual Life Center in Westfield, Mass. She had founded the retreat center in 1976 and served as its Executive Director until 2002. One of her dreams was to document the history and evolution of Genesis from its origins as the manor house of the Crane Estate. It was in 1976 that Sister Elizabeth transformed the 19-acre setting and buildings into the Genesis Retreat and Conference Center.

Capturing the early history was part of her plan as she designed a Genesis History Wall. Along the way, she had helpers to sift through the more than 45 years of the Genesis story. Delayed by the impact of the Covid pandemic, the project grew in intensity during the past year as Associate Patricia St. Amand began working with Sister Elizabeth and with Mr. Ed Pessolano, graphic artist, who had helped create the Wall of Remembrance for the Sisters of Providence at Mercy Medical Center during the SPs’ 120th and 140th anniversary celebrations. 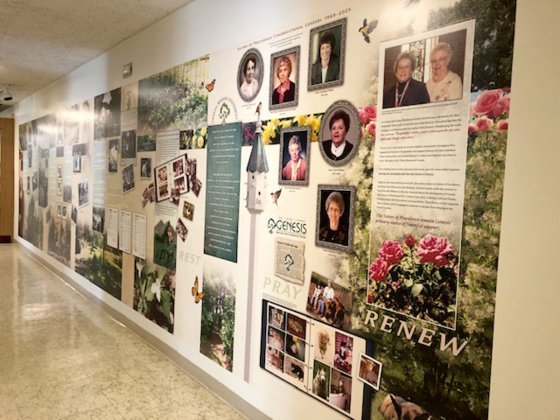 A first phase of the Genesis project was completed in early May 2022 as the approximately 30-foot history wallpaper was put in place in the Genesis main administrative corridor to everyone’s delight. This Phase I covers the coming of the Sisters of Providence to western Massachusetts; the acquiring of the Crane Estate; moving of the novitiate there; later establishing at the site a residential program for unwed mothers; rebuilding the facility in 1964; and then launching in 1976 the beginnings of Genesis Spiritual Life Center and Conference Center.

Sister Elizabeth desires that this history wall will “remind all who see it of the rich and blessed history of this welcoming place – the positive energy that remains and brings hope and healing to those who come to Genesis.”

Phase II history work has begun on the subsequent growth and development of Genesis – the people, presenters, participants, and even pets – who are integral to the story.