Providence Ministries (PMN) hosted an 80th birthday party for honoree Sister Margaret McCleary on March 29 at the Delaney House, Holyoke. Accolades abounded at the “Living Legacy Celebration” for Sister Margaret, who was not only among the first to recognize homelessness in the City of Holyoke, but also among the first taking action to address the issue. In 1980, she founded PMN when she opened Kate’s Kitchen and went on to establish other programs to feed and shelter those who were marginalized. These programs included Loreto House in 1981 and Broderick House in 1984. Today she remains a supportive PMN presence serving as the Board’s President Emeritus and as a mentor to the Ministries’ current leadership.

The emcee, the Rev. Marisa Egerstrom, a priest from Saint Paul’s Episcopal Church, Holyoke, and a member of the PMN Board, opened her commentary by describing Sister Margaret as “a radically honest human being.” Stressing her hard work, Egerstrom said, “Efforts like PMN do not just happen simply because ‘it is a good idea.’’’

Holyoke Mayor Alex Morse brought greetings from the City and with them a proclamation declaring March 29, 2019 “Sister Margaret McCleary Day.” He described her as “A living hero amongst us all.” 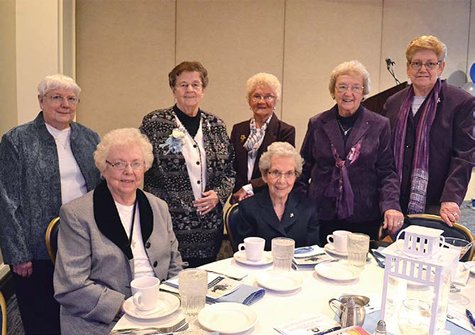 Offering grace and blessings
Sister of Providence Vice President Sister Mary Caritas Geary, also on the PMN Board, followed by offering grace, praying that God would grant Sister Margaret “the blessings she needs,” and “blessings on these Ministries so dear to her heart.”

Later, PMN’s Executive Director Shannon Rudder affectionately referred to the honoree as “a rebel with a cause,” and PMN Board Chair Jim Wall announced the Board’s birthday gift for the occasion—a new planned giving fund, aptly named the “Sister Margaret McCleary Legacy Fund.” 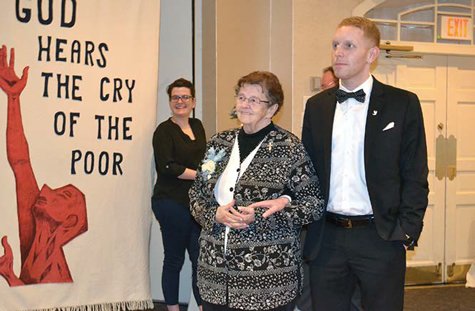 For her part, Sister Margaret praised her immediate PMN successor Robin “Bob” Goshea for his leadership following the August 29, 1999 devastating fire that decimated Kate’s Kitchen and Loreto House. “If it wasn’t for Bob’s actions,” she stressed, “I don’t think we would be here this evening.”

Other parts of her talk were laced with humor as she discounted others’ references to her “humility.” Then, putting levity aside, she said, “The only way I can express my gratitude (tonight) is using those two important words, ‘Thank You’ …from the depth of my heart.” She said she enjoyed meeting new friends that evening and addressed long-time ones, saying, “I’ve been blessed by your presence, support and love. We have stood together in the good times and in the difficult times.”

Her final words though were for her beloved Ministries, “Please consider how you can help the Ministries so they can, for years to come, nourish hope and rebuild lives.” 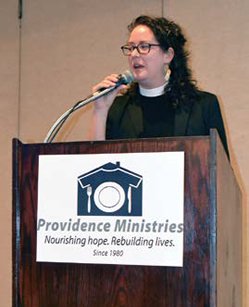 Emcee the Rev. Marisa Egerstrom at the podium.