Congratulations and accolades abounded for the new Hillside Residence facility at the September 27th Grand Opening of the ministry. Collaborating with the Sisters of Providence on the Hillside Residence initiative is Trinity Health’s Mercy LIFE program, or PACE—Program of All-Inclusive Care for the Elderly—already positioned on the same campus to provide Hillside Residence residents with health-integrated services.

Among those speaking at event were West Springfield city officials; state legislators; and representatives from the Commonwealth’s Department of Housing and Community Development (DHCD), Executive Office of Elder Affairs (EOEA), MassHealth Longterm Services and Supports, and the Community Economic Development Assistance Corporation (CEDAC).

Kelly Hopkins, President/CEO, Trinity Health PACE/Mercy LIFE, spoke about Trinity’s PACE model of care based on the belief that it is better for the well-being of seniors with chronic care needs and their families to be served in their own communities whenever possible. For the SPs’ part in making that happen with Hillside Residence, he said, “You did a wonderful job and I congratulate you.”

West Springfield Mayor William Reichelt was on the City’s Community Preservation Committee when the idea” for Hillside Residence surface, and was “happy to partner” with them from the beginning.

In view of so many years of effort to realize the dream of Hillside Residence, Senator James Welch reflected, “When you are really committed to something there is no limit to what you can do. I can’t stress enough how visionary a project this is, not only to transform this property, but to transform lives.” 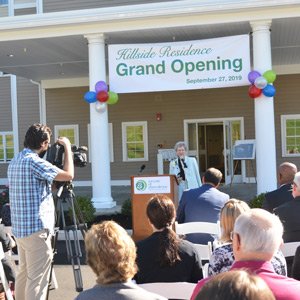 Hillside Residence, we believe, will demonstrate the value of health integrated housing for frail elders to keep them independent healthy, engaged and enjoying a quality of life not feasible if they had been placed in a nursing home.

State Representative Michael Finn said the SPs offer a great example of not saying, “We can’t,” but saying, “How can we?” He was one of several of the project’s collaborators asking the SPs, “What’s the next big plan?“ and adding, “We’re ready to go.”

EOEA Secretary Elizabeth Chen added, “Housing is critical for this agency (EOEA) and this project will help us deliver what seniors have told us they want—to stay in their community, at home with familiar surroundings, comfort and a sense of belonging.”

Whitney Moyer, Chief, MassHealth Long Term Services and Supports, agreed, “This project is a great example that we hope is an emerging trend across the Commonwealth.”

Completing important work
Lionel Romain, director of housing, shared that CEDAC has been working with Hillside Residence’s development team and described that collaboration as “a lot of work done by a lot of people. Thank you,” he added, “for the important work you are doing to create affordable housing.”

Paul Boudo, chair of West Springfield’s Community Preservation Committee, ended the speakers’ comments with, “It’s hard to believe it has only been 18 months since the ground breaking. There is a great need and demand for affordable housing.”