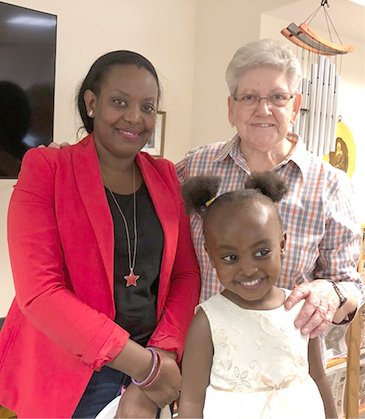 On September 23, the Sisters of Providence gathered to celebrate the United States citizenship of Ms. Ritah Mutesi Ganza, the mother of a refugee family living at a house located on the Sisters of Providence campus. The Ganza family, consisting of Ritah, husband Steven and their two young children, came to the United States in 2017 as refugees from the Democratic Republic of Congo. The Sisters worked with Jewish Family Services refugee program to arrange for housing for the family.

In the past five years, Sister Senga Fulton, SP has served as liaison with the family supporting them in numerous ways. She is affectionately called “grandma” by the children, including a third child who was born in 2020. During these years, the parents obtained employment and the children enrolled in a nearby school. Ritah became a nurse’s aide at a SP facility close by and soon started pursuing further education. She will receive her Associate Degree in Nursing in 2024. Once completed, Ritah plans to obtain a Bachelor of Science Degree in Nursing (BSN).

The Sisters at Providence Place congratulated Ritah – with her toddler in tow – on her newly gained United States citizenship and her many accomplishments. Sister Senga presented Ritah with a financial gift from the Congregation toward her BSN education.

Sister Senga commented on Ritah’s resilience and determination saying, “Ritah not only is raising three children – with the older two being excellent students, she is educating herself simultaneously while being employed. She is well known for her fine nursing skills, gentle compassion, and warm smile.”

The Sisters of Providence have been blessed in knowing this courageous family.